in which the vehicle is street legal and learns to lean

The story resumes now, after a total cost of $1665 and total time of 290 hours, inspection-ready.

A police car was behind me at a light in the middle of Maynard. It was right in front of the police station, in fact. In my rear view mirror I could see that he didn't really care about me. That or he was being especially careful not to care about me. The light turned, I punched the pedal, and the Maxion zipped up to speed. The police car's blue lights went on. I put my right directional on, but before I could pull over, he went around me, and kept right on going. He had other fish to fry. How about that. Other fish.

At the bike shop, I walked in with my registration, and declared to the guy there, the same guy who had inspected my 35-year-old Italian scooter just five days before, that I had come for an inspection. He looked over my registration, took my $15, and we went outside. He looked at Frankenstein's Trike, and looked again, and walked around it one way, looked some more, and walked around it the other way, and looked. "I'll be right back," he said. Bad sign, I thought. The boss came out, and worked it over well. Bounced the shocks, kicked the tires (literally) and shook his had regretfully. On his request, I honked, switched, dimmed, blinked. He crouched and squinted, stroked his chin, here, then in front, then over there, all the while making marks on a clipboard-bound page. He peeled the back off the sticker, and stuck it on the plate. I smiled. "Get some new tires." I told him I would, and so I will.

I stopped in for a Dr. Pepper at the Store24, and explained the thing to a few people who inquired about it. They think it's nice enough.

I stopped at the lumber yard, the one one where I have been buying nuts and bolts every couple of days all summer. They got a kick out of it. "So THAT'S what you've been doing."

Street legal. Here's the sticker, on the plate, quietly affirming that the registration, VIN, horn, lights, brakes, directionals, and tires (tho' barely the tires), are ok.

August 20 through September 27, 1999. Things sure got busy! Fall rolls on, Hurricane Floyd has come and gone.

The next step is to install the new batteries, which will be capable of delivering 200A without having the 36v sag. Perhaps, parhaps, I will be able to get the torque out of my motors with that power source. Otherwise, I'll be buying a rather expensicve NEW part: a larger DC motor.

My bet? It can work with these motors: the plots show thay are capable of delivering up to 10 hp, however inefficiently. We'll see...

Edward Tufte would be impressed at the information density in a Cold Performance Characteristics plot. (Click for an enlargement.)

These simple charts are rich sources of information about electric motors. (My only complaint is that the independent axis is motor torque.) The plot pictured is for a fairly typical 36v golf cart motor, in this case a Prestolite. From it, one can get the approximate rotational speed, current, efficiency, and power output for any torque at the nominal operating voltage of the motor.

I'll want to try with exactly this battery and controller set up to see whether the old motor could be doing this just as well. Though I sure doubt it, but dman I want to be sure sure sure.

End result? I am drawing about 120A at the saggy 44v to go 35 mph, give or take. That's something like 5-plus hp to the wheels, given 90% drive efficiency and 80% motor efficiency. Inefficient. More later.

First commute! About 9 miles each way.

Way in: cold, but uneventful.

Way home: one hitch. The fuse for the main contactor (the giant relay that enables the drive circuit) blew when I bit a bump. Go figure. Swapped fuses with the headlight circuit (not yet dark out!) and went on home.

Thanks to the whole crew over at work: the golf cart chargers there have different plugs, we did a simple twiddle to get current to the charging circuit.

I made a second commute, this time using the Hitachi motor. I have confirmed that this old golf cart motor gives a lower top speed than the new, expensive beauty mentioned above. That's always a relief, isn't it? Part of how I proved it: on the way home, I "threw a chain." The chain from the motor to the jackshaft came off. Having prepared not for that, but rather for the general possibility I'd need the new motor, I brought a spare chain with me. Within five minutes of breaking down, I had put the new chain in place and swapped hot wires from the right motor (Hitachi) to the left motor (Advanced DC AC4) and continued home.

Thanks again to the Operations guys at work who let me charge up my vehicle over at The Barn. 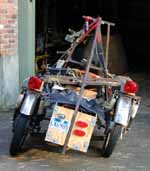 Limited lean. Here's a shot of the modest tilt employed in a little debugging run. Click for an enlargement.

Limited tilting run! This from a note to some tilting colleagues around the planet.

As some of you know, I have been debugging the electric drive in the Maxion (my second TTW) and finally I am getting up to the spec'd 40 mph I need for my commute. I have been looking forward to unbolting the two rods that hold the entire beast square to let the pivots pivot, to let it work with the natural lean central to its design. The one undone piece was a pedal-actuated tilt-lock, so that at low (or no) speeds, you can keep from flopping over to 45 degrees and having all those hefty batteries make it hard to get back up, and maybe spill acid in the process.

Well, it was a gorgeous day in New England, and I couldn't wait for myself to build a tilt lock, let alone springtime. So, as a temporary and enabling method, I used some beefy loading straps to limit the tilt to about 15 degrees each way (down from the possible 45 degrees each way). What a weird feeling! You start out at a lean, no choice there, and press on the pedal to get the vehicle rolling. Then you turn hard-ish into the lean and get the vehicle to "float" to an upright position. Glorious! Above 10 mph, it rides like a big bike. Go faster, and get such convincing stability that you can't believe that it is dynamic. The weight distribution is still suboptimal; there's too much mass "out back." (Consequently, at some middle range speeds (around 15 mph) you can get kind of a tail-wagging oscillation going. This instability opportunity is exacerbated by the fact that one of my pivot point's welds broke. Dang.) Nonetheless, it was thrill, and I look forward to the next steps. Oh, it is sweet!

That's only the third tilting run for this beauty: first, unpowered rolling down a hill at a park outside Boston; second, under power (and into the bushes when my feeble tilt-lock failed); and third, this powered, successful, and blissful couple of miles around the neighborhood. Oh joy.

What a gas this machine is! (And yet, no gas. It's electric.)

About to end the season.

Time to close up the season: get my dear wife out to take some snaps of a limited-lean tilting run. Click any of the above for an enlargement. (There you can see the heavy straps holding the lean to about 20 degrees.)

Well, here's what's about to happen:

It's winter for this beast. It's time to pick up with Maxion Log, Part Six.

Back to Back to Max Hall's homepage.

Back to Maxion table of contents.

More information about the nifty kin of the Maxion can be found at the Tilting Three-Wheelers home page.
Send me email!