in which the chassis is improved and the drive is refined.

The story resumes now, after a total cost of $1153 and total time of 163 hours and a reasonably successful test drive.

The two Commutamatics meet just before Commutamatic I is scrapped. (Click any for an enlargement.)

I learned a lot on the first one.

July 23 and 24, 1999. The improvements driven by the lessons of the test drive mostly implemented.

Note backward leaning black-and-white strut. It's one of four added to beef up the suspension. With the Trojan T-145s removed and replaced with lighter 12v RV batteries, this will be just the right amount of support.

This excerpted from an email I wrote:

I have recognized that I have two problems to contend with first, one tractable, one more difficult. The tractable one is that I am experiencing voltage drops in my system apart from the motors. Part of it is in some dirty connections and some undersized wires; I am dropping as much as 3 volts (!) circuit wide and heating up some connections and short spans. (That's about a kW all by itself!) Shame on me. The other part is that my six 6v batteries, which were freebies from a guy refreshing the traction pack in his converted Chevy S-10 (96 volt machine... a real beaut!) may not have enough life in them, even for me. I get pretty big sag on demand (the nominal 36 will drop as low as 30.5, which is a little below the magic cut-off I have been told about of 1.75v per cell, or 31.5 for the pack).

Between those two voltage loss things, I am getting only about 28v across my TWO motors under load, obviously that's a big step off of the 36v I could have. Old batteries do get some pizzaz back with a few cycles of use, but I may have to bite the bullet. Load testing per battery, and a hydrometer, are in my immediate future. But then, maybe these aren't the right batteries... which brings me to the larger problem.

The tougher problem goes back to my misreading the load label on my donor bikes' back fenders. Really, the 500 lbs of batteries is a lot for my frames, even having added two shocks/springs to the original pair on each of my donor motorcycles' rear ends. My first order response, I think, will be to go to smaller batteries and sacrifice range for now. I have 4 12v deep so-called "deep cycle" marine/RV batteries to play with, and to experiement with.

My thanks to my father-in-law and to Bob Batson of Electric Vehicles of America for their very useful consultations on my observations. 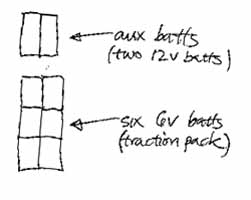 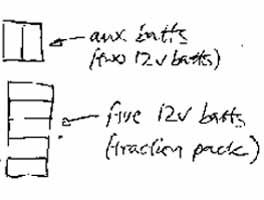 It'll be a good diagnostic tool to have current measurement, that's for sure.

Being watched like a hawk. This marsh hawk, or northern harrier, is one of three who tears apart rodents for lunch around our house. They seem to like the radio and the grinding wheel ok, or at least they are not repelled.

Big, fat, old resistive controller from a golf cart. This controller is about 20 years old, but is reliable for its simplicity. It is basically a giant variable resistor with a wiper that contacts the resistive element at different points along its length. The longer the path through the resistor, the higher the net resistance. The last point of contact bypasses the resistor altogether.

The bike is ready for inspection. It's time to pick up with Maxion Log, Part Five.

Back to Back to Max Hall's homepage.

More information about the nifty kin of the Maxion can be found at the Tilting Three-Wheelers home page.
Send me email!