in which the chassis is completed and then cut apart.

Somewhere after September 27 I started thinking that I needed to build another trike. It ought to be simple, safe, and reliable, with the intended purpose of being my commuting car (less than 20 mi ea way, no place where it is practical or, for that matter, legal to go over 40 mph). This frees up its more experimental and hard-to-handle tilting brother, The Commutamatic to be less constrained in its development.

The funny thing is that I was buying frames for another trike before the idea had completely jelled. I go on whim pretty often, and I trust it pretty well. Thus, I found that before the idea of taking the commuting burden off the tilting Commutamatic was fully formed, I was already gathering parts for the next one, and thinking what would be different.

Here's a quick summary of the design arguments on three-wheeler planning:

October 1, 1998. Buy two scrap 1975 Honda CB200 bikes (no engines, just rolling frames). Thanks Matt and John over there in Maynard. They paint bikes and cars and do beautiful work.

October 4, 1998. A little disassembly. (Big up and respect to my mother- and father-in-law for my impact wrench!) Tie the pair of motorcycles side by side with a few welds. 3 hrs.

Siezed Honda ready to give itself over to the light. This CL175 will be used solely for its front end. It has an intact speedometer and sound suspension, not to mention a brake in good shape.

October 12, 1998. Like this: Last item: use ratchet straps to hold the thing until I can weld up the drop tube to the rest of the frame.

Siezed Honda better off without its engine. Off we go. Lighter and ready to cut. The hammer is acting as a sort of kickstand right now.

Two frames with the driver's seat in approximate position. This pretty certainly going to be a one- seater. The seat is in its approximate finished position. Note that the vehicle has no front end... yet.

Two frames with the proposed seat in approximate position, front view. The seat is low and centered. That red thing in the middle is a jack holding up the middle of the frame.

Strapped together, but not welded. The front end is attached, in this picture, with claps and a ratchet strap in preparation for welding. Note that the vehicle has a front end... sort of. 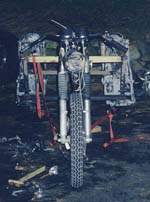 Strapped together, but still not welded. It almost looks like... well, something. It is still ready to weld. Get on with it!

October 1998 continued. On the march to registration: Used a title service to recover the title of bike #3, whose VIN will be the one under which I register the vehicle. (Someday. Some sweet day.)

Through November 8, 1998. Pathetically little progress. Having a job'll sometimes do that to you, eh? However...

Today I cut up one of the other Honda frame fronts. I wanted JUST the steering bearing (I'm sure there's a more elegant word for that, but heck) and none of the frame to which it attaches. Purpose? Well the steering is going to be a parallelogram made from a second steering bearing, second set of handlebars, and pivoted linkages from one handlebar over to the other. That way, the driver sits comfortably in the seat, and yet holds handlbars which connect to the main handlebars and feel really comfortable and normal.

I really needed a break today, and the fates of hackery gave me one. I found that the cut I made in the bike #3's crossbar weeks and weeks ago just happened to be at exactly the right angle to make the new steering bearing sit exactly parallel to the existing one. The aduacity of attempting to make progress was met this time with a lack of friction. How nice.

Flash! I'm thinking of calling it the SuSiE-Car for Super Simple Electric Car. It has not got, after all, a differential or a steering linkage. It does't get much simpler than that!

All I did was add a few welds to the second handlebar's bearing, and did a little thinking about the whole thing. I like this project!

Well, a funny thing happened to me on the way through time. I am going to make the Maxion a tilter. HEY! In honor of this momentous decision, I think it's time to begin the Maxion Log, Part Two! By the way, so much for "Super Simple Electric Car" because it isn't so simple anymore.

...and if you don't know what a "tilter" is, check out the Tilting Three-Wheeler Page.

Back to Back to Max Hall's homepage.
Send me email!