Instantiations of the Dream:

An explanation of description shorthand can be seen here. (For instance, what does 1F1T mean? It means the vehicle has one front wheel, and that one tilts.)

1F1T, Assisted, Gas, 1 seat, Closed. In 1983 GM's Frank Winchell put together a tilting trike. An example used to reside at Disney's EPCOT in Florida, but apparently is gone now. I think that means there is no example of it on public display! It's a damn shame.

I could see no reference in the account of the Lean Machine to Jephcott, but they might as well have had a conversation, so similar are the concepts. Click the above picture for a series of three grainy shots of the Lean Machine in a turn. Quotations, and these photos, are from Road & Track, January 1983.

"The challenge, then, was to come up with a vehicle that seals out the bad weather, gets extraordinary mileage, occupies little more parking space than a motorcycle and doesn't intimidate its driver by tipping over on slippery pavement.

Those last two, as seen by Frank Winchell, were difficult, as narrowness and a reluctance to flip and tumble are mutually exclusive traits in a 3- or 4-wheel vehicle. A motorcycle, like a running human, maintains stability by leaning into a turn. Leaning moves the center of mass away from the contact patch (tire or tennis shoe), allowing gravity to balance the centrifugal force pulling outward on the center of mass. The faster the corner is taken, the more lean is needed to counter the centrifugal force."

The tilt in this vehicle is controlled by foot pedals; left pedal makes a tilt to the right. This is different that, say, an airplane, but maybe makes sense since you are pushing away from the turn, a rather natural response, like a person running. This vehicle, amazingly, has a maximum tilt of 55 degrees, and at least one article claims 1.2g of acceleration is possible, although this claim is disputable.

These pictures were taken by a nice guy named Kevin E. at the GM Pavillion at EPCOT years ago. Thanks, Kevin! (Click for an elargement.) Alert reader MMCPT97 sent this in September, 2000:

"I have been a fan of the lean machine since the first time I saw the mock up
in Epcot Center in 1983. Here is a scan of the brochure that I picked up
during that trip."

Thanks, very much indeed! 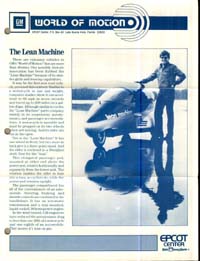 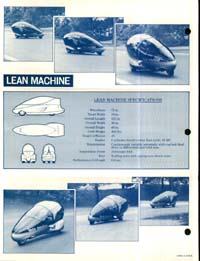 In the summer of 2004, a very nice guy (and three-wheeler builder himself) named Greg McGibbon emailed me. He mailed some snapshots from his own visit to Epcot for me to scan (which I did, and hustled right back to their home, in a SASE provided by Greg... I told you he was very nice!) Check these out. You can see the simplicity of some of the components, not to mention the foot pedals and the lightweight framing.

And a note on intellectual property and copyright: as far as I know, everything on this page is available elsewhere on the web, and all sources are cited. Complaints and questions are always elcouraged, email me.

Back to Max Hall's home page.
Or Send me email!