These pictures come from the Microcar and Minicar Classic, Larz Anderson Park in Brookline, Massachusetts, in July 2000. 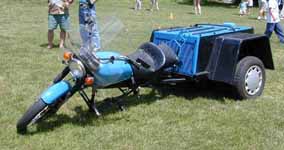 Steve's tilting mech is made from a drive-shaft universal joint and a trialer ball hitch. So natural is his natural leaner that he needs no tilt lock. 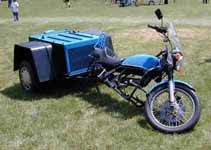 There's a former Subaru front-end inside the blue box. I got to drive his trike; when you twist the throttle and the automatic transmission starts the 4-cylinder engine revving and pushing you forward, it sounds as if you are bign followed by a small car! Which, in a sense, you are. 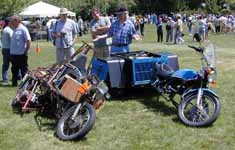 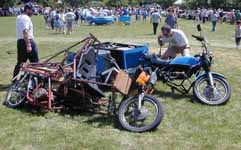 They both have a max. lean of about 45 degrees exactly.


There are five parts to this site: