Pics of the pre-production Aileron. 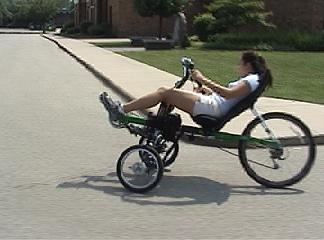 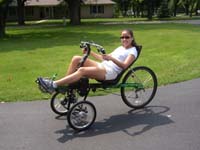 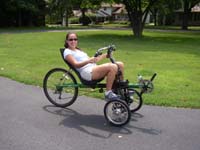 New Aileron SWB tadpole TTW. Built to a donor Bacchetta bike chassis. This looks like it will make it to production.

1F3T, Automatic, Electric, 1 seat, Open. Wayne SooHoo powered this version of his Alieron trike and included integrated multimode air driven roll control. Roll power just in time. (You may have seen his human-powered version on the human-powered TTW page.)Wayne is available on a consulting basis; he can be contacted at this e-ddress. 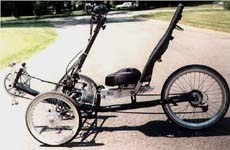 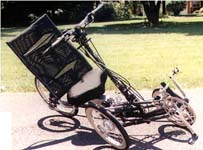 2F3T. A very sophisticated, yet simple, TTW HPV. Wayne SooHoo is licensing this very interesting technology. Any interest? He's wsoohoo@ameritech.net. Give him a shout.

The following is the text from the article which accompanied the picture above, which, if you like, you can click for an enlargement.

By Dean Weaver
The Northwest Herald