in which mechanical completeness is dis-declared for some good-sized changes.

My buddies at the auto recyclers have provided me with a Suzuki Samurai rear axle and differential (it's the narrowest I could find in any contemporary car) and the front spindles, axles, etc. from an 80's F-150. Time for some bulking up.

WHY? WHY?!?! SURELY I have better things to do than to go back and re-do things that work! And I've wanted to get on to fabricating an aluminum skin for so long! Well,

the sly boots himself, R. B. Fuller, as it turns out, departed from his the original patent drawings, at least in Dymaxion #2 (which I visited again in Reno in March of 2004) and used some sort of truck front-end left-side spindle INSTEAD of forks for the rear wheel! Next stop is hubris when I think that I was planning to do what Fuller and company did before I knew that they did it! (Steady, boy.) Here's a picture of the assymetrical rear configuration: 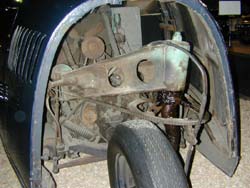 I have to worry, as he and his crew must have, about left or right "pulling" in the steering, since the projection of the steering pivot would have to meet the ground in the center of the tread width. I am also happy, finally, to KNOW that the caster angle is pretty much zero. (I wish I had such a perfect picture of that sweet verticality, but I don't. I simply got to observe it.) I still can't believe they got away with cable steering and non-hydraulic brakes, but they did. (Or did they? Maybe Vehicle #1's Chicago crash was made more probable by rear end wobble because of elasticity in the steering cables. Despite the cable thickness, there's nearly 40' in the steering loop... and it's steel. Springy, springy steel.)

Speaking of springy, here's to spring, and the opportunity to do some work outdoors without the risk of hypothermia after a long, cold winter. I regret that I am deferring the time when I start working on the body, but I want it to be mechanically "tight" before I proceed. Andiamo.

These shots represent a combination of a) the mess I made in my own personal episode of "Monster Garage" and b) the temporary work shelter I made outside the garage. Nothing like welding under the blue tarp! It must have been funny to drive by late at night and see the uneven, but very bright, arc lighting.

The hand-lever steering worked ok. Unfortunately, at this even I popped a couple of welds in the rear wheel mount. (I had tacked some joints with an AC-stick welder while pondering a hack to keep my MIG running, and I didn't redo the joints well enough! Mechanical failure at low speeds is far preferable, hey?)

What didn't work was my rear suspension: too laterally springy. The fixes *could* include:

But NUTS to THAT. I am officially giving up on rear-wheel steering. At some point (a decade or more after his three Dymaxion prototypes) even Bucky Fuller said he would use front wheel steering if he had to do it over. So late so smart for the both of us.