My pilgrimmage to Reno

Legend had it that this vehicle #2 was found serving as a chicken coop. More recent evidence (that came my way August 2003; thank you to the National Auto Museum) discounts that notion. In any case, the decades-old interior was in very bad shape. This is why the windows are, at the time of this writing, painted opaque from the inside. A difficulty the good people at the National Auto Museum face in restoring the interior is the paucity of photos and plans of the interior. Here's to their success. (Of course, tell someone if *you* have useful information!)

Another important item: Bucky Fuller's car lost some credibility with the public when it was involved in a fatal crash. At first it seemd it was a rollover, all by itself. Later investigation, however, found that a second car of sightseers was involved in a high-speed collision on the highway. (Source: among others, Buckminster Fuller's Universe, Lloyd Steven Seiden, Perseus Publishing 1989. ISBN 0-7382-0379-3) 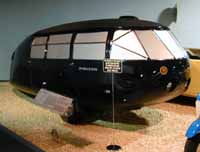 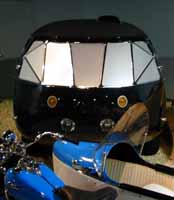 Back to the Dymaxion page.